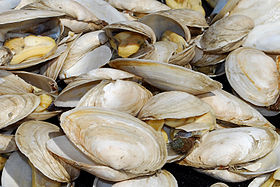 However, it’s hard to get “good ones!” Also, not many people know how to steam them correctly and unfortunately most people don’t know to eat them correctly. So as a well-seasoned Native Mainer, I’ll tell you how to do it.

First, you need to find a source to buy the freshest ones (and, more importantly, those with least amount of fine sand in their bellies). The former is not too hard if your go to a good fish market – not the seafood section of your supermarket. The latter is much more difficult. I usually have to freshen them up and de-sand them myself. So, I’ll tell you how to do that. Buy two pounds of live clams – that’s a good meal for two people with average appetites (three pounds if you are really hungry). Put them is a pail of cold seawater (use fresh water with 2 tablespoons of Kosher salt, if you are not handy to the ocean). Sprinkle about a half a cup of corn meal on the top of the water and let the pail set outside for the evening. The clams will ingest the corn meal and excrete the sand in their bellies – leaving their bellies full of very edible corn meal.

Now, if you are lucky enough to live near Topsham (across the river from Brunswick, the freshest and least-expensive seafood is at Candrell Seafood (just beyond the Topsham Fair Mall on Route 196.) It’s just beyond the the Express Service Station… and easy to miss since it sets back from the highway on the right. I have seen fresh haddock for $3.99 a pound, Steamer for $1.99 a pound and raw oysters for $1.00 each. But, call (207-725-7227) to see what’s currently on sale.

Now, how I like to cook them. If, you have a 2-part lobster pot you can use it. Most of the time, I just use a large stock pot with a folding strainer laid in the bottom. Pour a bottle of Guiness Extra Stout Beer in the pot. Next, put a couple of smashed cloves of garlic and put in ½ cup of fresh chopped parsley. Lay the clams on the strainer and cover. Cook on high heat until you see steam coming out around the edges of the cover – about ten minutes. Remove the cover, the shells should all be open. Turn the heat off and replace the cover until ready to serve. Don’t pour out that wonderful broth! 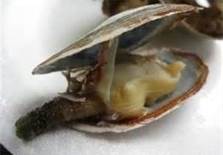 The next steps are critically important. It’s best to have some garlic French baguette bread slices keeping warm in the over. Sprinkle a little grated Parmesan cheese on top of the slices. Everyone get a plate of steamers, a cup of clam broth, a small custard dish of “Drawn Butter (heated butter with the fat skimmed off) and another custard dish with a small amount of cider vinegar… and couple of pieces of garlic bread. I like a quality cold beer with my clams, but homemade lemonade is good too.

Now, how to eat them: Take a partially-opened clam, open it all the way until one side of the shell falls off. Grab the clam by its neck in one hand and use your other hand to pull off the gray “sweater” that is loosely draped around his neck and down one side. Put the sweater in the community shell bowl. You don’t eat that part of the clam, but you will be eating everything else. Waggle the clam in the broth, dip it once in the butter dish, once in the vinegar dish… and then pop it into your mouth. Savor the fullest of the taste and then swallow it. Chase it with a sip of cold beer!