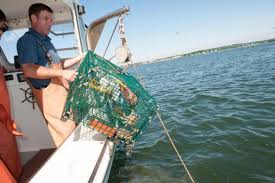 Believe it or not, there was a time in Maine (not that long ago) when people were not particularly interested in “living on the water”… unless they were fishermen or sailors.

Maine lobster men needed to have ready access to their boats to perform their back-breaking year-round work of “hauling their traps” and getting their catch to the co-op for an expected cash payment for their efforts. Lobster men traditional pay very little income taxes and often indulge in bartering for what they need – pretty savvy Yankees, these yellow-slickered Mainers.

Unfortunately, the paradigm has changed and everyone (especially out-of-staters) want waterfront property!  As Will Rogers once said, “…and they aren’t making any more of it!” So, the price for it has escalated exponentially.  That causes the property taxes to escalate –  often driving the fisherman from their oceanfront homes. Add to that, the exploitation of their waterfront land by subdividers and you have cultural shock for many Down East Mainers.

But those that survive do so by tending at least 800 traps year-round and enduring the rigors of unfriendly weather to produce a catch for which they are often poorly paid by the middlemen. Currently, they are lucky to get $3-4 dollars a pound while the restaurants charge five to six times that amount. Then too, the government is always limiting their catch with quotas.
Some interesting trivia about Maine lobster men: They are very territorial about who fishes where… and new wannabe lobster man often have to pay for the rights of acceptance (they usually have their lines cut by the veteran lobster men whose fishing territories have long been earned by the fishing ancestors). Lobster boats are expensive, most are now fiberglass, and the cost of fuel and bait is often prohibitive. Good bait (alwives being the best, but Porgies are less expensive) is hard to get and usually a lobster man will need to hire a stern man to re-bait his traps. Maine lobster men are very superstitious! They would never have blue-painted lobster boat and would fear to help any other lobster man in distress who had a blue boat. The word “ham” is never said because it brings the worst of bad luck. To bring a ham sandwich onboard a lobster man’s boat in unthinkable.

Lobster men are the iconic symbol of Maine, but they are becoming an endangered species, unfortunately.