Many of my website viewers keep asking for blogs about people who live and work in Midcoast Maine. This blog is another story which will give you the flavor of what it’s like be a “Mainer.”

The dream of “Living in Maine” is a compelling magnet for a lot of people. Over 30 years ago, I had an old furniture warehouse (previously a pant making factory) listed by my real estate agency. I sold it to Halcyon and she promptly moved her Denver weaver and yarn supply business to this prominent downtown Bath location. The business flourished and became a quality mail order resource for weavers, knitters, crocheters, rug hookers, spinners, and felters  – all over the world. Today, it’s one of the largest yarn stores in this country!

Recently, they celebrate their 40th anniversary as very successful business with many satisfied customers! They refer to themselves as “your local yarn store online.” Their website is www.halcyonyarn.com  They offer group classes in knitting and spinning to facilitate participant networking.

Since my website is devoted to telling the story of “what it’s really like to live in Maine” …. in addition to promoting my real estate business…I decided to do this article on Halcyon Yarn, previously known as “Halcyon, the Weaver’s Friend.”  Native Mainers are very welcoming to those who choose to move here since their interests are permanently rooted and not simply seasonal. Halcyon became very active in the fabric of the “Bath Community” and even did a stint as a city councilor. The company was recently named “Maine Family Business of the Year.” The Halcyon Team takes their inspiration from the joy of living on the Maine Coast.

The history of knitting is intimately intertwined with the history of weaving. Weaving was remarkably sophisticated even in Neolithic times. As early as 3000 BC the Egyptians were knitting cotton socks with stranded knit color patterns.The 21st century has seen a resurgence of knitting. Natural fibers from animals, such as alpaca, angora, and merino, and plant fibers, chiefly cotton, have become easier and less costly to collect and process, and therefore more widely available. Exotic fibers, such as silk, bamboo, yak, and qiviut, are growing in popularity as well. Celebrities including Julia Roberts, Winona Ryder, Dakota Fanning, and Cameron Diaz have been seen knitting and have helped to popularize the revival of the craft.

Some physiotherapists realize the health benefits of cross-stitching and knitting to help alleviate even suicidal depression. It also has allowed people to reduce their pain medication. Knitting is a wonderful way to take time for yourself and to reconnect with your spirit. There are few sounds as pleasantly hypnotic as the rhythm of a turning spinning wheel.

A few primary schools teach knitting before they teach math. It teaches early students to follow patterns (in through the front door, once around the back, out through the window, and off jumps jack). It also develops their fine motor skills, which will be put to the test in the coming years.

Knitting has been scientifically shown to increase right and left brain interaction. Because it requires two hands to knit, both sides of the brain are stimulated. Many people pay a lot for therapy that does the same thing. Knitting is often prescribed as a way to calm down and relax. It has been shown to initiate a “relaxation response” in many people. It’s a great way to be still! This can lower blood pressure, improve heart conditions, and even lessen insomnia.  I have a male surgeon friend who knits to keep the arthritis out of his gifted hands. The craft teaches us to work through our frustrations and not react to situations in anger (since that makes the knots in your yarn even tighter). Weavers and knitters develop a measured response to situations that serve them well in every aspect of your life. Maybe that’s why the people continue to buy yarn and weaving threads during an economic recession.

If you are “looking for some peaceful time” to explore your creative skills, I heartily recommend that you consider the joy of knitting and weaving. More importantly, this posting should be a beacon of encouragement for those who would love to also move their business to Midcoast Maine. “Maine – the way life should be!” 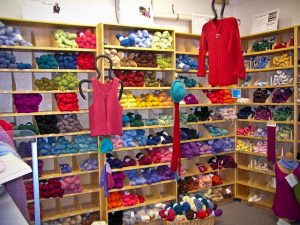 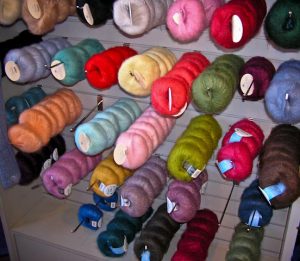 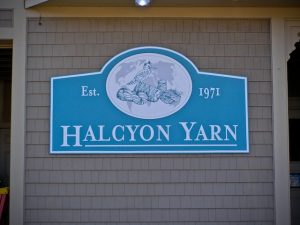